In 1932 Marshall Keeble, a dedicated world-wide evangelist was invited to preach the gospel to black Wichitans by two existing congregations in the city. A tent meeting was set up on the corner of Eleventh & Indiana and many came to hear the gospel. As a result thirty five souls obeyed the gospel and the black church grew from that great tent meeting.

In August of that year, the Jack Wheeler Hall at 13th and Wabash was rented as a place of worship. A year later the church was fully organized with proper leadership. As the congregation increased it became evident by early 1934 that there was a need for better facilities. A building at 11th and Wabash was then rented for a place of worship. Later that year, a lot was purchased at 1135 Wabash and a church building (the one pictured below) was moved from Rose Hill, Kansas and placed on that lot. 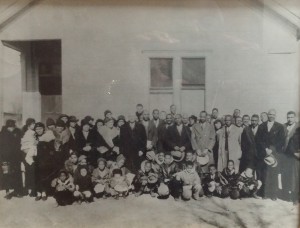 In 1952 the Eleventh and Hydraulic property was purchased for the growing congregation. The congregation has been blessed with help from many outstanding ministers throughout the years. Also elders and deacons were appointed as the membership grew. As a result of continued growth 45 acres of land were purchased on East 37th St. North. In the summer of 1986 a ground breaking ceremony was conducted on the property. Two years later on June 12, the congregation drove in a caravan from the 11th and Hydraulic building to attend the first worship service in the new building. Bro. Robert Clemons was the minister at that time.

Since being at this location two buildings have been added. The church is serving the community through its Food Distribution and Homeless programs. Weekly visitations groups serve the congregation, souls are being taught and other plans are being made to continue to do “what doth says the Lord.”